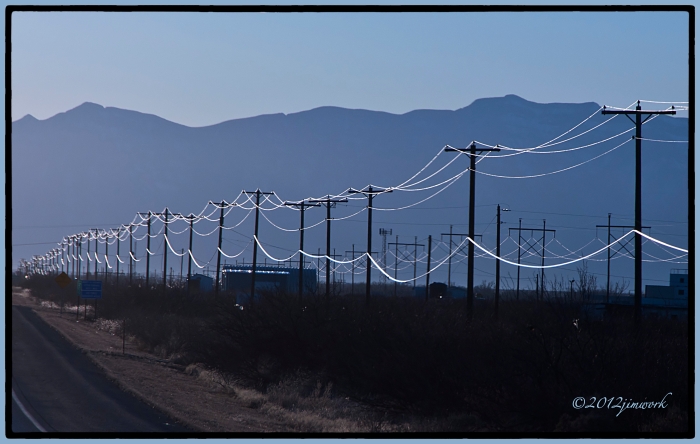 We were heading west from Alamagordo, NM going to the White Sands National monument for a hopeful sunset with the Sandhills. As we drove the light was reflecting off the utility lines with the delicacy of a pearl-like necklace. I am usually fighting, hiding or trying to escape telephone poles and lines. They are always where you don’t want them. So, I had to stop and make a frame of an object I am always running from.

I hope that my granddaughter Larissa Janae will be asking me in a few years, “Papa Jim, what were those poles and lines that were in that photo?” That phone lines will go the way of television antennas and giant satellite dishes.

Which then will lead to all kinds of questions about Glen Campbell’s ”Wichita Lineman”…I am a Lineman for the County? What the heck is that song all about? I was actually humming that song as I viewed the image in my viewfinder.