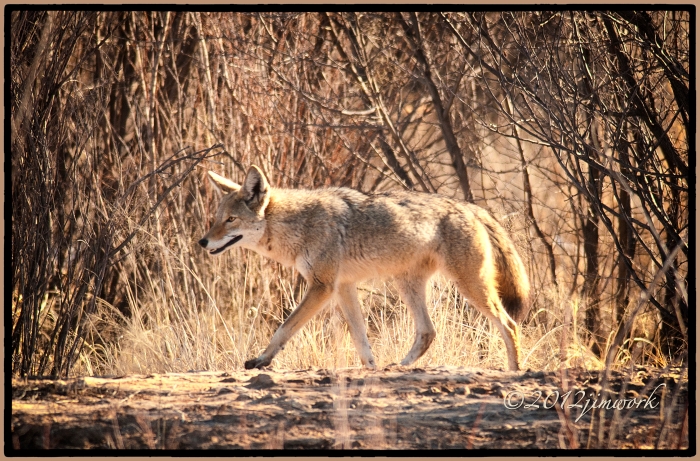 In my last posted photo of a coyote, I had put up an image of an injured, weak, broken and lonely coyote. This one was healthy, strong, and running with a pack of four. What a difference friends and family can make!

Yesterdays post of the sparrow spoke of that bird’s story as an immigrant. Not so with the coyote. Coyotes are native only to North America.

“The coyote is a living, breathing allegory of Want. He is always hungry. He is always poor, out of luck and friendless. The meanest creatures despise him and even the flea would desert him for a velocipede.”
…Roughing It….Mark Twain
While populations of many other animals are shrinking, coyote populations are actually increasing. Coyotes once lived only in prairies and deserts of the western United States and in Mexico. Today they thrive almost anywhere in North America.The coyote’s keen intelligence and senses help it adapt to many different habitats: forests, deserts, prairies, mountains, suburbs, cities, and even golf courses.

I love this fact “In order to not get detected by predators, sometimes coyotes walk on their toes to make as little noise as possible.”  Would love to see a coyote walking on his “tippy toes”

This trickster of Native American tales often gets fooled—but it always bounces back.