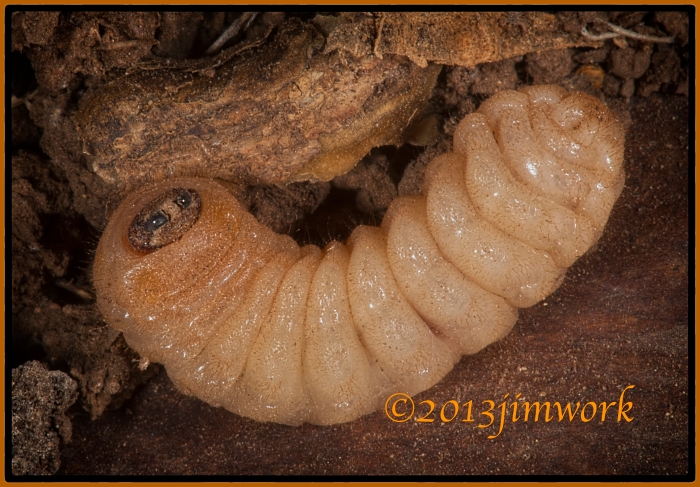 We had the “pleasure” of digging out an old prickly pear cactus that had both outlived and outgrown its usefulness. As we were digging out the last of the major roots, this terribly ugly grub worm appeared in my shovel. All work ceased as I went to grab my macro set up.

I worked with this guy ( I have a propensity to call the uglier bugs guys & the prettier ones  girls, call me a sexiest) looking for his good side. I got to tell you he didn’t have one. He looked like something Jeff Probst would give a contestant a full plate of  as a test of willingness to win an ill conceived game. Alas, I have to confess that while I constantly proclaim the stupidity of the whole show, I have not missed any of the 26 seasons. With season 27 coming on September 18 @ 7:00 CST.

This is a legless and seemingly eyeless larva. What appears as eyes are pinchers I assume for tunneling through the dirt. I could not determine which side was top or bottom. He seemed to have the same dilemma as he kind of rolled and scrunched his way along with no idea of which side worked best.

One google search included in the definition: “The larva is a legless grub  that resembles a tiny white sausage.” It seems strange that we would also use the word as a synonym for food.

Well, I guess I will go get me some grub for breakfast. Bacon please, no sausage!!!