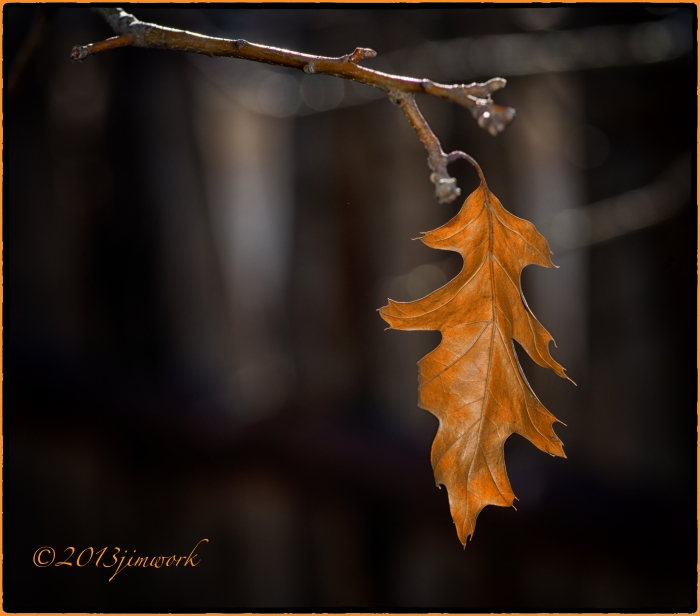 Off my front porch there is a lone oak tree that still has one leaf that refuses to fall. We have had up to 60 mph gusts the last few days and yet it still remains. It so reminded me of the beauty of the words of O’Henry’s THE DYING LEAF. Enjoy the wikipedia “Cliff Notes” version below or better yet, Google the title and you will find several sites to read the whole short story.

“Johnsy has fallen ill and is dying of pneumonia. She watches the leaves fall from a vine outside the window of her room, and decides that when the last leaf drops, she too will die. While Sue tries to tell her to stop thinking like that, Johnsy is determined to die when the last leaf falls.

An old, frustrated artist named Behrman lives below Johnsy and Sue. He has been claiming that he will paint a masterpiece, even though he has never even attempted to start. Sue goes to him, and tells him that her friend is dying of pneumonia, and that Johnsy claims that when the last leaf falls off of a vine outside her window, she will die. Behrman scoffs at this as foolishness, but—as he is protective of the two young artists—he decides to see Johnsy and the vine.

In the night, a very bad storm comes and wind is howling and rain is splattering against the window. Sue closes the curtains and tells Johnsy to go to sleep, even though there were still one leaf left on the vine. Johnsy protests but Sue insists on doing so because she doesn’t want Johnsy to see the last leaf fall. In the morning, Johnsy wants to see the vine, to be sure that all the leaves are gone, but to their surprise, there is still one leaf left.

While Johnsy is surprised that it is still there, she insists it will fall that day. But it doesn’t, nor does it fall through the night nor the next day. Johnsy believes that the leaf stayed there to show how wicked she was, and that she sinned in wanting to die. She regains her will to live, and makes a full recovery throughout the day.

In the afternoon, a doctor talks to Sue. The doctor says that Mr. Behrman has come down with pneumonia and, as there is nothing to be done for him, he is being taken to the hospital to be made comfortable in his final hours. A janitor had found him helpless with pain, and his shoes and clothing were wet and icy cold. The janitor couldn’t figure out where he had been on that stormy night, though she had found a lantern that was still lit, a ladder that had been moved, some scattered brushes, and a palette with green and yellow colors mixed on it. “Look out the window, dear, at the last ivy leaf on the wall. Didn’t you wonder why it never fluttered or moved when the wind blew? Ah, darling, it’s Behrman’s masterpiece – he painted it there the night that the last leaf fell.””