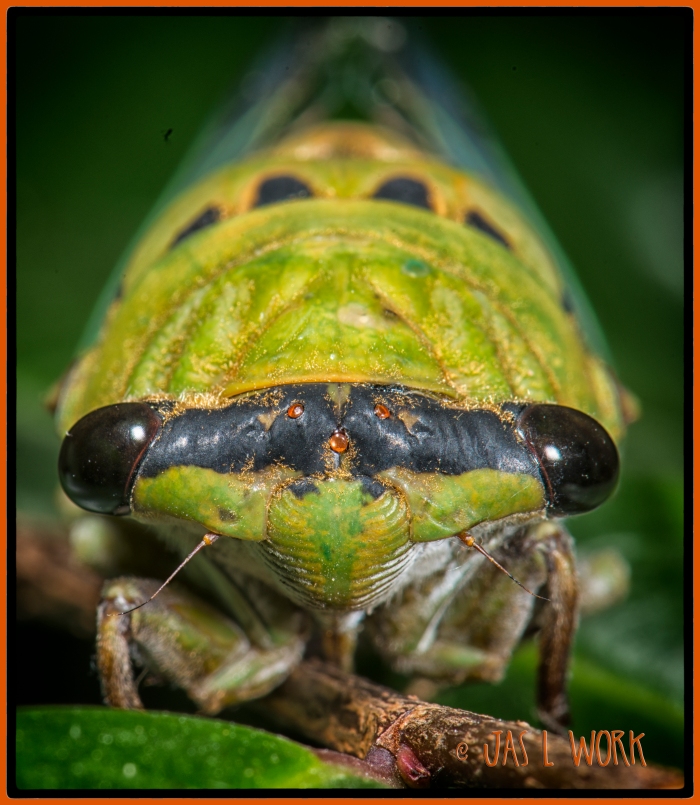 Ah yes, along with the oppressive heat comes the ear piercing cry of the cicada. More info than you probably want or need:

Although only males produce the cicadas’ distinctive sound, both sexes have tympana, membranous structures by which they detect sounds. They are the cicadas’ equivalent of ears. Males disable their own tympana while calling, thereby preventing damage to their hearing this is necessary partly because some cicadas produce sounds up to 120 dB (SPL), among the loudest of all insect-produced sounds. The song is loud enough to cause permanent hearing loss in humans should the cicada sing just outside the listener’s ear. In contrast, some small species have songs so high in pitch that the noise is inaudible to humans

To the human ear, it often is difficult to tell where a cicada song is coming from; the pitch is nearly constant, the song sounds continuous to the human ear, and cicadas sing in scattered groups. If a singing male becomes alarmed on the approach of a possible enemy, it softens its song so that the attention of the listener gets distracted to neighbouring louder singers, creating a confusing ventriloqual effect.

In addition to the mating song, many species have a distinct distress call, usually a broken and erratic sound that the insect emits when seized or panicked; at the same time it is likely to squirt waste liquid from the sap that it had been sucking, possibly distracting certain classes of attacker. Some species also have courtship songs, generally quieter, and produced after a female has been drawn by the calling song. Males also produce encounter calls, whether in courtship or to maintain personal space within choruses.

A pray for cool and quiet!  monos en theos†††jas L